We started in 1937 as a small hatchery and feed mill.

Shown here is our founder, Herman Hickman in his hatchery complex in Gordo, Alabama in 1956. Over the years, Peco has grown into a fully integrated poultry processing and packaging company.

1930s
In 1937, John Herman Hickman agreed to raise about 75 white leghorn biddies for his brother-in-law, Oscar Bernard Blakney, who was leaving for college. As a result of this decision, he became a poultry producer, feeding and watering and keeping brood light on the chickens at night. Before too long, he was walking the streets of Gordo, Alabama, knocking on doors and selling the chickens to housewives for Sunday diners. He sold all 75 and needed some more. He obtained an incubator, which was run by kerosene, and ordered some more baby chicks. This early venture involved about 300 eggs. Mr. Hickman borrowed $500 from Leonard Housel, a Gordo hardware store owner, and bought some Jamesway hatching machines in which the eggs had to be turned by hand. In 1938, he moved his operation to the rear of the co-op store and integrated it into his growing operation. 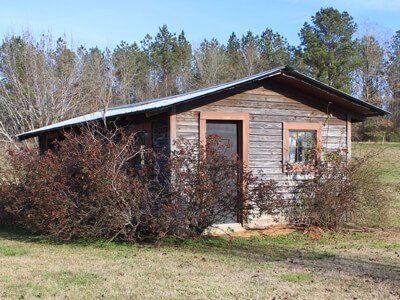 The original wooden hatchery used by Herman Hickman in 1937 to start his business. It still stands today across from the Gordo, Alabama Hatchery.

1940s
In 1940, Mr. Hickman developed the idea of having other people grow chickens for him. He began to sell the chicks and the feed to farmers who would grow them back on the farm. He, in turn, would make arrangements to help the farmers market their chickens through Harris Poultry and Egg Company of Tuscaloosa. During the forties chicken grew in popularity as an ideal meal to serve the family. As Mr. Hickman's business grew his two sons, Herman Jerome and George Denny, became interested in the business.
1950s
During the fifties, the chicken market continued to develop, and the industry developed the contract concept. The poultry man provided the chicks, feed, medication and know-how and a guaranteed market; the farmer provided the labor, housing, and caring for the birds. This became the predominate method of growing chickens. In 1951, Mr. Hickman and George Koon, Sr. built eight broiler houses in the Gordo, Alabama area with a goal of processing 5,000 chickens a week. In 1953, Hickman helped organize the Pickens County poultry men into a producers association; he served as president, and Koon served as secretary-treasurer. Hickman's brother, Clark, joined the organization as hatchery man in 1955, the same year that work began on a feed mill to supply the 25 contract growers on contract at that time. In 1955, Hickman entered the Registered Angus cattle business, a move that blossomed into a substantial cattle business which saw Hickman Farms holding auctions. He remained in this business until around the early 1980's.
1960s
In 1966, a new feed mill and hatchery were built which brought production up to about 125,000 chickens per week. In 1968, Harris Poultry and Egg Company merged into Hickman's operation, and the name PECO became the brand name. In 1969, construction began on a totally new and modern processing plant in Tuscaloosa, Alabama replacing and expanding the old operation.
1970s
In 1970, the new processing plant opened. Production was now at 230,000 chickens per week, and the Peco operation had 115 growers. Also, six grandchildren came on the scene during this time period. In 1978, a new feed lot for cattle and chickens was constructed about 5 miles north of Reform, Alabama.
1980s
In 1980, work was completed on a modern new hatchery in an area a few miles north of Gordo. This new complex offered the company a chance to handle 700,000 birds per week with over 120 growers. In 1983, Mr. Hickman made one of his largest career moves when he acquired the processing plant from Harris. This allowed Peco to expand into the export, fast food, retail and food service markets. In 1984, John Herman Hickman as inducted into the prestigious Alabama Poultry Hall of Fame on June 9, 1984, honoring the contributions he made by hard work, clever thinking, daring gambles, and willing helping hands.
1990s
During the nineties, Peco grew dramatically by acquiring four new processing complexes in Mississippi.
2000s
Peco has become the 13th largest poultry company in the United States.
2010s
Peco acquires Townsends Poultry complex in Batesville, Arkansas and becomes the 8th largest producer of poultry in the United States. Peco constructed a state-of-the-art hatchery and processing plant in Pocahontas, Arkansas along with a feed mill in Corning, Arkansas which began operations in 2016.